I was listening to an awesome podcast (it’s called Happier by Gretchen Rubin) and the team were talking about motivation. More specifically they were talking about how different personality types reacted to things like a to do list. One of their listeners suggested that a ‘Ta Da list’ can be heaps better than your standard To Do list.

Don’t miss: Can you actually choose happy? (Some thoughts and a printable for you)

The Ta Da list is basically a list that you owe nothing to, and this concept made me fall a bit in love with the idea. You could have a daily or weekly or whatever Ta Da list. But it got me thinking about goals.

I used to be really into goal lists; dreaming up what you want out of life/work/family can be a really great way to focus your energies, but they can also be a bit of a downer. A few months ago I found a goal list I wrote in 2011 and even though I had smashed the majority of them, one was still (deeply) in the realm of fantasy. It bummed me out a bit. House, yup. Two kids, yup. Living by the beach, yup. Working from home as a writer, yup. Size eight, ha ha ha ha ha.

And I know it’s crazy; the fact that I had written that in my top-ten life goals is a bit embarrassing really, but there it was, that little goal that was important to brand-new-mum Babs. It made me feel instantly crap about the number on my jeans label, instead of proud of all I have achieved since becoming a mum.

After I got over the fact that my clothing size was still in the double digits, I started thinking about bucket lists and, of course, I instantly felt stressed that I didn’t have one. I couldn’t even think of one thing I wanted to put on one. Should I write even one? If I did, should I put really outrageous things on it to encourage myself to live a crazy life? Or should I just be super-conservative so I would have more of a chance of completion and death-bed satisfaction?

So instead of fretting about my bucket list or out-of-control To Do list, I made myself a Ta Da list. For this week, this year and this life.

I know that no matter when I find it and re-read my Ta Da list, I will never owe it anything and it will bring me nothing but snaps for being so productive and awesome. Now, that’s the kind of list we all need in our lives. 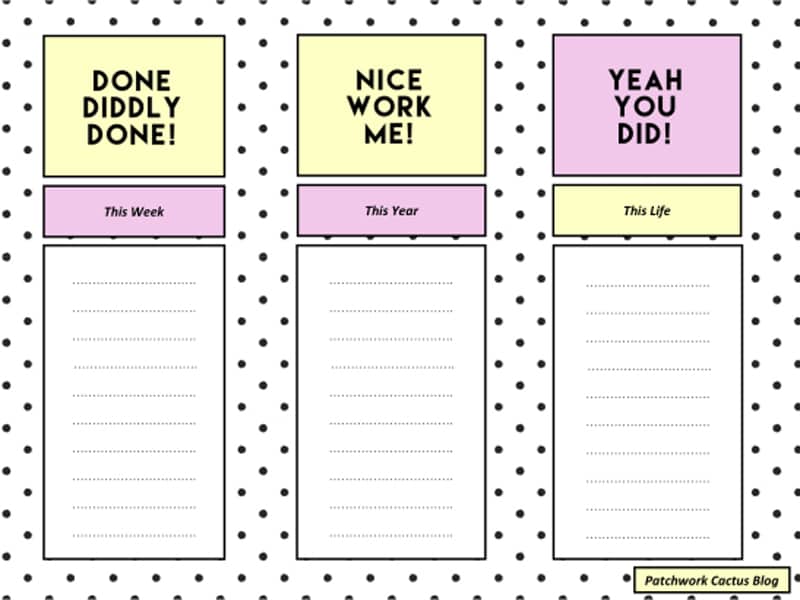 Do you think a Ta Da List would be helpful?

[…] my To Do list (and hopefully my Ta Da list) are all the little scraggly bits that we let go in the holidays to spend time with our kids. All […]