When it comes to my kids’ parties, I always leave things until the last minute and I always try to spend as little money as possible. This Alice in Wonderland party had the smallest budget of all. Which somehow seems fitting for an Alice theme.

I always like to have a ‘story’ woven around any party we make. With an Alice in Wonderland party, this was the easy bit. We just followed Lewis Carroll down the rabbit hole.

The best way to weave a story into a party is to have a ‘treasure hunt’. The treasure hunts I do are interwoven with games, food, prizes and other party moments.

Here are some of the things I included in the Alice in Wonderland treasure hunt:

The game started by making origami rabbits. I showed the girls a completed rabbit, then demonstrated how to make the rabbits as we went along.

I found out how to make origami rabbits here: (This is just about the twee-est video I’ve ever seen so be warned.)

Once folded, the girls decorated their rabbits. I asked the “most creative” rabbit owner to unfold my demo origami rabbit to reveal the first clue.

Down the rabbit hole we go

The first clue told them to go “down” the rabbit hole. At the bottom of our front steps they searched and found their next clue.

Drink me, eat me

The next clue was attached to one of the straws.

Eat me, eat me

The fourth clue told the girls to choose a cupcake and “eat me”. We had the cupcakes (iced by my girls before the party) set up and each girl chose a cake to eat. The next clue was inside one of the cakes.

The fifth clue told them they needed to be “on time” for a tea party. We hid the clue behind a clock inside and there was a mad dash to find all of the clocks.

This clue wasn’t really a clue at all, rather an invitation from the Mad Hatter to join him for tea (thank you so much Lorelei for lending us the Mad Hatter hat – Arabella loved it!).

We had such fun setting up the Mad Hatter’s tea party. The only things I purchased especially were the large-sized cards (A for Arabella, of course). Everything else we already had from previous parties (for instance, the pink flamingos were from last year’s Island Party).

Each girl had her name on an individual naked cake. Having the formality of a ‘place setting’ really made the girls feel extra special. I was amazed when they all sat down for tea and stayed there, chatting away, for almost an hour. Some of the tea cups and plates we already had, others were from my SIL and MIL or purchased from Vinnie’s for $5 a set.  The greenery was straight off the bay tree in our garden and I bought a bunch of flowers at Woolies to add some colour.

The food I can take no credit for – it’s all the work of my talented SIL. Friends often ask if she is a professional baker and I take great pleasure in telling them that she is actually a doctor. A doctor who enjoys filling children up with sugary goodness, presumably.

There was a tiny table setting with tiny cakes. Ooh la la!

Pink flamingo biscuits: you can get a flamingo cookie cutter here and after making and icing the biscuits a couple of days in advance, we wrapped the biscuits in cellophane to keep them fresh.

Mushroom strawberries: marshmallows topped with a strawberry (held together with a toothpick), topped with icing dots

Tea bag biscuits: you can get a tea bag cookie cutter here and download the tags here.

Panna Cotta: Try this recipe. The little containers were from the discount shop and the love hearts and spades were cut from royal icing using mini cookie cutters from a set like this one. We sticky taped cards together to form the stand.

Woodland mushrooms: half a cherry tomato on a cube of fetta with bocconcini spots sitting in a hummus-filled pastry case

Sandwiches: Little ham and cheese sandwiches cut out using cookie cutters. One is heart shaped, the other is… ah, supposed to be a mushroom…

An extra little surprise was the coloured lemonade that poured from the tea pots. Such a simple thing to do (a couple of drops of food colouring into the lemonade), but absolutely loved by the girls. There was a different colour in every pot and they enjoyed mixing their ‘tea’ to produce a custom colour.

Back to the Alice in Wonderland party games

Once the girls had exhausted their long list of things to chat about over tea, the game continued. One of the girls had the next clue hiding under her saucer.

This was for the “Cacus Race”. In the book, the characters ran around in circles going nowhere, but in order to make things more fun, we created a Cheezels Race. The idea was to get a Cheezel around the circle using only the straw in your mouth. If the Cheezel dropped, you were out of the game.

The victor received the next clue. Initially I had planned for them to spend an hour swimming in the ‘pool of tears’, playing pool games, but alas, the weather was not on our side (it was an unexpected 16ºC that day). Instead the clue directed them into the ‘forest’ to find Caterpillar and their next clue. We had thumbtacked a cut out of the Caterpillar and on the back of the cut out was their next clue.

This was to find the Cheshire Cat – thumb-tacked high on a tree – and look around beneath his smiling face for their next clue.

Greetings from the Queen

The second last clue of the party led them to find the Queen (me, of course!), who stood up on the balcony above them. The Queen gave them all a stern talking to about being late. To punish them, before the girls could blink, the Queen threw a huge stack of cards over the balcony.  The cards scattered all over the garden. “Find the next clue written on one of the cards if you want to keep having fun,” the Queen said snootily.

It took a while, but the girls loved searching for the cards in the garden (Arabella said it was her favourite game of the day – beats me). The clue card was finally found and the by-now exhausted girls were very pleased to hear that it was time for a movie.

Alice Through the Looking Glass was a huge hit (and a welcome break for the parents). We served popcorn while the movie was on and set up a water station for the girls to help themselves. At “intermission” Ari blew out her candles and we all had Messina ice cream cake (OMG – so unbelievably good!), which was gifted to Ari by her uncle.

…and how she would keep, through all her riper years, the simple and loving heart of her childhood… 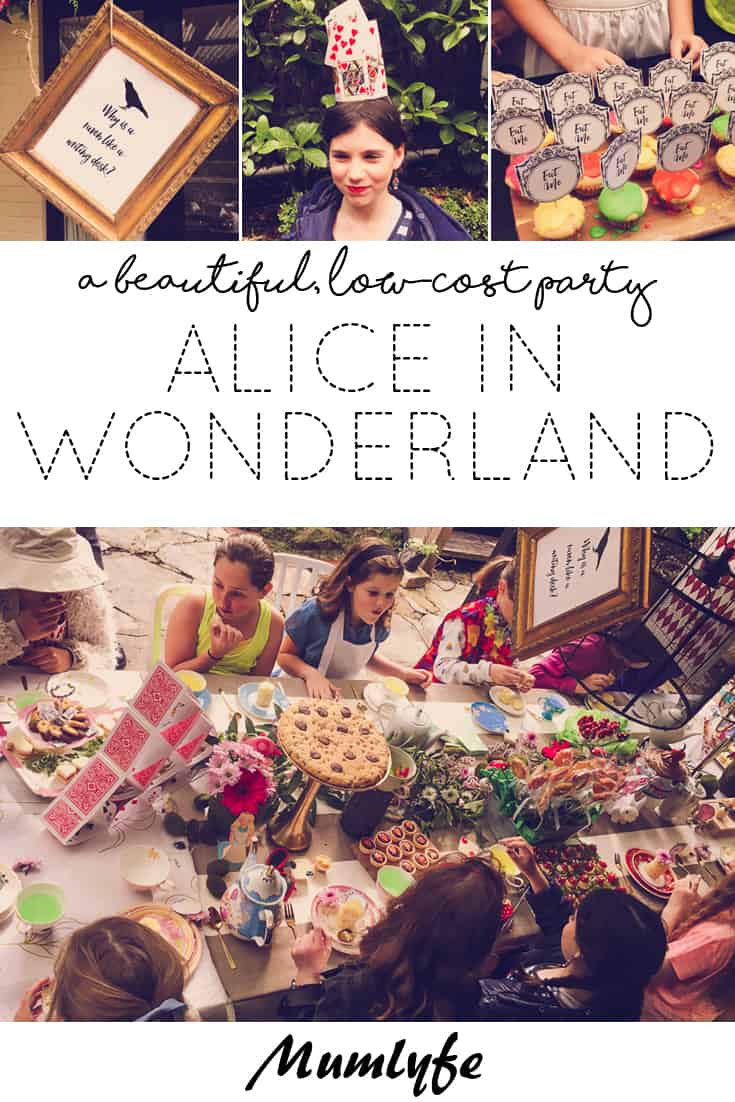