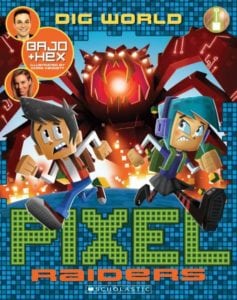 Book Boy Junior is back this week with a review of a new book series that gamers will love!

About the book: Pixel Raiders #1 is about a young boy named Rip and a young girl named Mei. They are sent to a gaming contest for school, and the winners get to play a new game that hasn’t yet been released. Rip and Mei are so eager to beat each other that they don’t realise that others are beating them, and they lose the competition.

When a mysterious parcel arrives, containing the new game and a VR headset, they put it on and don’t realise that they are trapped in the game, called Dig World.

What I thought: I enjoyed this book a lot! It might be scary for younger readers, with the realisation that Rip and Mei are trapped in the game, but it’s also very exciting. I liked how the story reminded me of Minecraft and those sorts of games, and I never wanted to stop reading because I wanted to find out what would happen. Because I read at night, it left me lying in bed wondering what would happen next.

My favourite character was Rip because he was always so brave, no matter what was happening.

I would recommend this book for ages 9+ as it can be a bit scary at times. If you like playing games, or the show Good Game (the authors are the presenters of that show), you would like this book.

I already have the second book in the Pixel Raiders series (Dragon Land) and can’t wait to read it!