Taralli are like very crispy bagels and are made to various recipes all over Italy. My kids’ Nonna makes hers with fennel seeds and they are moreish and perfect for an afternoon snack, to serve instead of bread at the dinner table or with dips, olives and gooey cheese at parties. Taralli are also unbeatable in soup.

Nonna tends to make bagel-sized taralli, but I prefer the mini versions. These make a fab lunchbox snack.

You can bake taralli for less time to make them softer if you like, but traditionally they are baked almost as hard as bricks. Just like a brick, they last pretty much for all eternity when stored in an airtight jar in a dark pantry.

Nonna has a ready supply of taralli on hand at all times, baking them at least once a month or more regularly if needed. Nonno says that a well-stocked taralli jar is comforting and satisfying.

How to make taralli 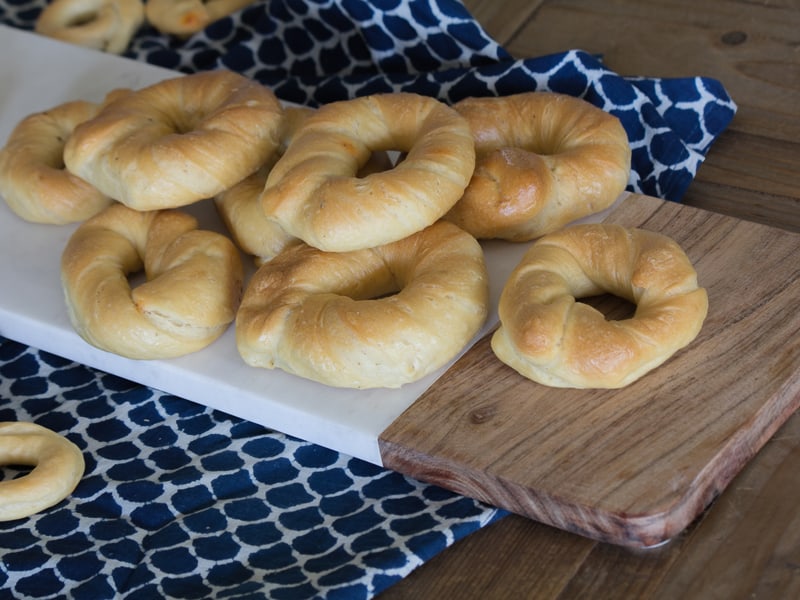 Makes about 25 bagel-size taralli or 60 mini versions.*
Takes about an hour

*Nonna triples this recipe to make her taralli in bulk.

On a clean, flat surface, mix together the flour, salt and pepper and fennel (if using).

Make a well in the centre and pour in the water and olive oil. Bring the flour into the liquid until a rough dough starts to form.

Lightly knead the dough until it start to come together and then knead firmly for about 10 minutes until it becomes springy. Helpers are good at this stage!

Cover the dough and allow it to rest for about half-an-hour. Your arms will be grateful for the time out too.

When the dough is ready, put a large pot of water on the stove to boil and preheat the oven to 200°C.

Now it’s time to take pinches of dough and form each into a ball before it rolling out like a long sausage. 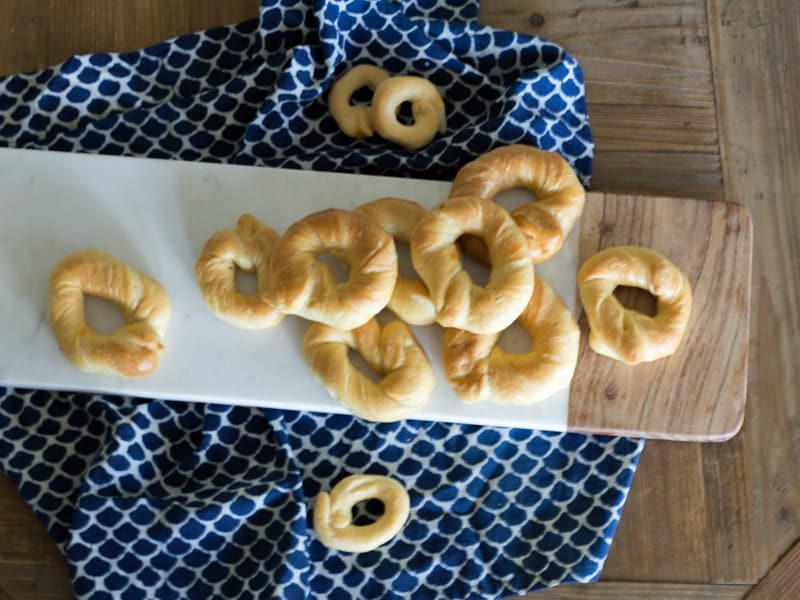 Shape each sausage into a ring, and press the edges together then place on a damp towel to keep them from drying out. Nonna makes her taralli on the kitchen table covered in a slightly-wet bed sheet.

Drop about 6-8 tarallis into the boiling water – don’t crowd the pot. You only need to boil each taralli for less than a minute before they float to the surface. Remove floating tarallis immediately and place them on a clean cloth to dry and cool.

Once cool, lay the tarallis on baking sheets lined with baking paper and bake in the preheated oven for 25-30 minutes until golden.

Remove and place on racks to cool and harden. Once cool store in an airtight container for many weeks.

What traditional recipes do you cook at home