Do your kids love lateral thinking puzzles as much as mine? Especially my youngest. She’s always been my ‘joker’ and since she’s gotten older, it’s gone from knock, knock jokes to mind-benders like these lateral thinking puzzles. Actually, given her penchant for puzzles, I keep meaning to introduce her to cryptic crosswords, but I’m not sure I’d be much help in teaching her!!

So, in honour of her current fascination with all things lateral thinking puzzles, I’ve gathered up a small collection to blow her sweet mind. I’ll list the puzzles here, then provide the answers elsewhere. That way you can stop yourself from looking for the answer and really try to figure it out. So tempting to ‘cheat’ on these kinds of puzzles, but so many of these lateral thinking puzzles have a truly obvious solution when you stop to think them through.

At 12 years old and in Year 7, I know my daughter will still love gathering some of these favourites to try to trick her friends. Speaking of which, I must also do a round up of some magic tricks for her because that’s her other current fascination…

These are good too: 50 hilarious jokes for tweens

There are six eggs in a basket. Six people each take one of the eggs. How can it be that there is still one egg left in the basket?

A man walks into a bar and asks the barman for a glass of water. The barman pulls out a gun and points it at the man. The man says ‘thank you’ and walks out. What’s going on?

A man is lying dead in a field. Next to him there is an unopened package. There is no other creature in the field. How did he die?

A man pushed his car. He stopped when he reached a hotel at which point he knew he was bankrupt. Why?

A woman had two daughters who were born on the same hour of the same day of the same month of the same year. But they were not twins. How can this be?

A man is in dark room having a great time. Suddenly, he stops breathing and can’t speak. In a matter of moments his breathing returns to normal. What happened?

7. The coal, carrot and scarf

Five pieces of coal, a carrot and a scarf are lying on the lawn. Nobody put them on the lawn but there is a perfectly logical reason why they are there. What is it?

Several voices were heard coming from the other room. There was a lot of commotion however when the room was checked there was only one person sitting quietly inside. This person wasn’t crazy, so what’s going on?

A man is driving on a sunny day when suddenly it starts to rain extremely hard. A few minutes later the rain stops, instead a gusty wind picks up. Very quickly it is so windy that the car starts to shake due to the hurricane force winds. Just as quickly, the wind drops completely away and the man was able to drive safely home. What’s going on with the weather?

You are standing next to three light switches. All three switches are now in position off. You know these switches belong to three lights in another room, but you can’t see into the other room.

You can do whatever you want with the switches and when you are finished you will go into the other room and say which switch belongs to which bulb. How will you do that?

How can you divide a cake into eight pieces using just three cuts?

How did you go? Does your child love lateral thinking puzzles too? Do you? 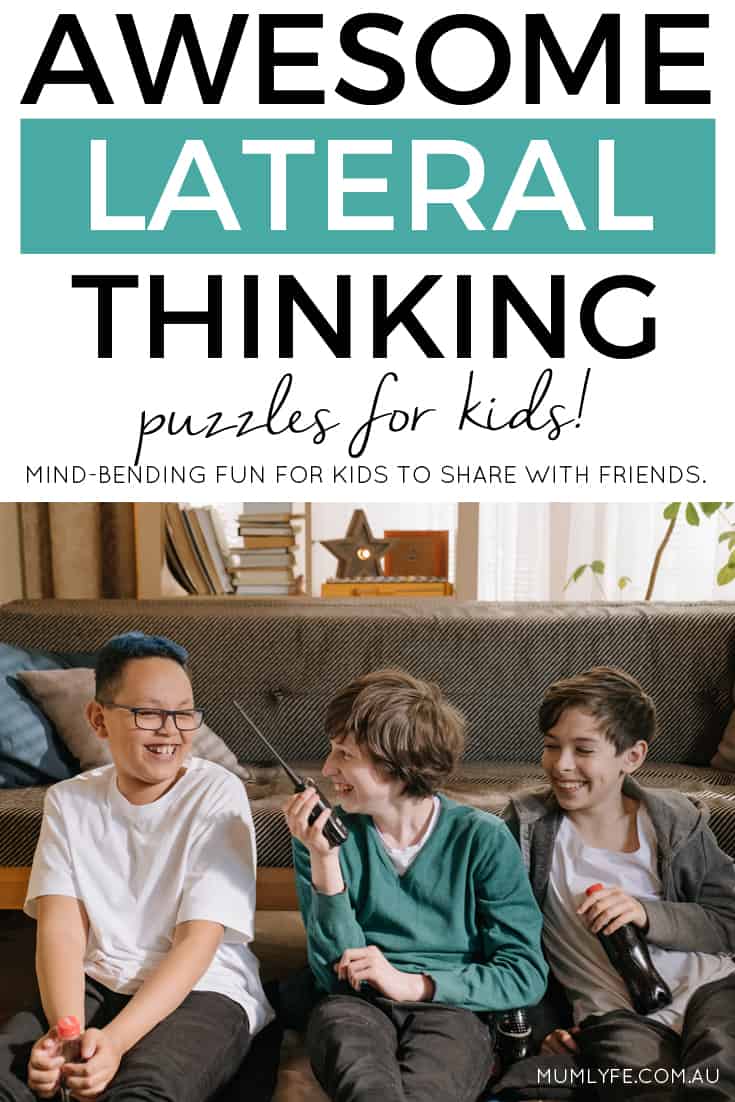