There is not much scarier than raising teens. We all sniggered and laughed at our ‘threenager’, but nothing is quite as crazy as a teen mid rebellion.

They will fight you for independence, but only if it’s not too scary and they don’t need to do much.

They will fight you for responsibility, but only if they can take a week’s break from it whenever they want.

They will insist on doing everything their own way, even though their way involves a lot of couch surfing and texting.

I’ve got one teen – almost 14 – and he’s always a been a contrary kid. His teen years are already breaking me and we’ve barely begun. My second turns 13 this year too so I  do feel like I need a lie down. 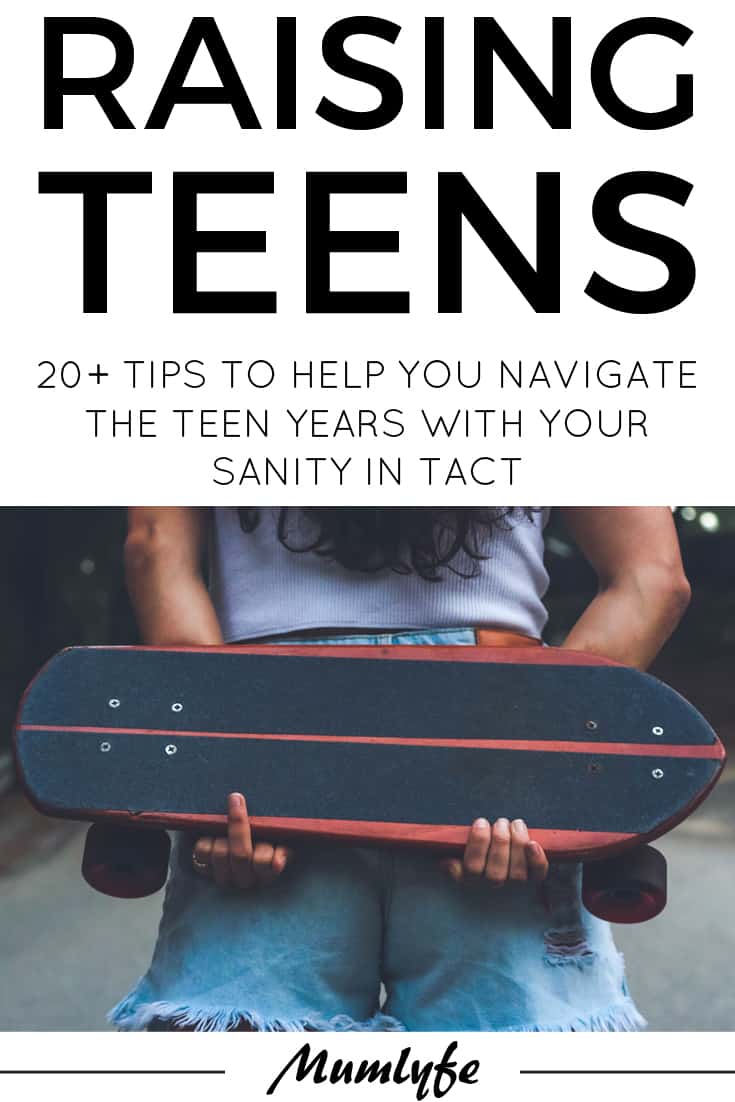 I try not to pry, even though it’s hard. Instead I say, “I’m here if you need me” and hover a little bit.
Tracey, mum of three, including two teens
Read ‘Yes Your Teen Is Crazy’…. best book ever for when your teens are becoming wayward.  Trust me, I know.
Seana, Sydney Kids, mum of four, including two older teen boys
The three Cs. I made these up, so they’re not a real thing but they are Confidence, Candour and Compassion. If you have instilled confidence in your teen, you can usually have confidence in them. Candour and honesty in every answer to every question. It builds openness and trust. Compassion because it’s hard being a teen. They run on intense emotions and what might seem small to us can be enormous to them.
Amy, Handbag Mafia, stepmum and mum to three
Even after they are driving themselves, try to drive them somewhere at least once a week. When teen boys are in the back of the car and they can’t see your face, they tend to open up more.
Clare, mum of two teen boys

Connection and communication are by far my best tools.
Kate, Picklebums, mum of four including 14-year-old twins

One-on-one time becomes so vital during the early teen years. A quiet chat at the end of the day eases the way – make it a ritual.
Bron (that’s me!), mum of three, 9, 12 and 13 years

Fix up your own own issues if you haven’t already.
Seana, Sydney Kids, mum of four, including two older teen boys

Trust in the groundwork you have done. Trust that the values, the love and the guidance you have shown them will be enough. Have faith that whilst every move may not have been perfect, it was always done with the greatest of intentions. And thankfully and usually, that will be enough.
Martine, The Modern Parent, mum of five boys
The teen years are the ‘discovery’ years – it’s when your kids peek behind the curtain and see you’re really just a little guy at the controls. Be the biggest little guy you possibly can.
Bron, mum of three, 9, 12 and 13 years
When the kids get older you realise that it’s not ‘me time’ you crave but ‘us time’. Getting time with your teens is really hard, so make sure you prioritise it.
Emma, mum of four boys, 13, 15, 17, 22
Never, ever bullshit a teen. They will sniff you out with their finely-tuned BS detector and it will not be pretty. Trust is everything when you’re raising teens.
Adelle, mum of two, 14 years and 16 years
We are not just raising teens, we are raising ourselves too. Go gently.
Bron, mum of three, 9, 12 and 13 years

Getting my teen off his $%#@ing device is probably my hardest parenting hurdle. I tried everything to get his head out of the games and engage with life, but the only thing that has actually worked is to pay him. So, yeah, I pay my kid to talk to me and I’m okay with that.
Ally, mum of four, 6, 9, 11 and 14 years

I have the passwords for all devices for my kids. If I ever pick up their phone / computer / iPad, etc and I can’t get access, that’s an immediate ban for a month.
Adelle, mum of two, 14 years and 16 years

We have really strict rules in place around screen time. I can’t afford to be lax because it unravels so quickly. No screens until 5pm weekdays and no screens at all one day a week.
Bron, mum of three, 9, 12 and 13 years

My daughter would remain connected to her friends day and night forever if she could. Insert major eyeroll here because their conversations really are not that interesting!!! I have to literally lock up her phone, iPad and computer at bedtime to get her to disconnect!!!
Sue, mum of three girls, 8, 10 and 15 years

The boys have to do chores on Sundays to learn the wifi password for the week. One digit equals one chore.
Clare, mum of two teen boys

Help your kids learn to play to their own strengths. The education system is set up for everyone to be good at everything, but we all know that’s not true. Teens respond well when we focus on their strengths and interests.
Bron, mum of three, 9, 12 and 13 years

You might find that you have more interest in your kid’s education than she does. Work out what her true values are and figure out a way to help her shine. That may or may not involve doing well at school.
Sue, mum of three girls, 8, 10 and 15 years

I do a half hour of ‘extra’ work with my kids most afternoons. I am teaching them research skills and essay techniques that I just don’t think are enough of a focus at school. My eldest is almost through uni and he credits his good marks to my afternoon sessions.
Emma, mum of four boys, 13, 15, 17, 22

My son had zero interest in school and found it hard to make friends too. Once we removed the expectation that he would do well and integrate well, things improved for him enormously. Getting average grades and being a loner isn’t how I was at school, but that’s just him. You’ve just gotta let go sometimes.
Anne, mum of one, 15

So I’ve already admitted to paying my kid to get off the screens, so it will come as no surprise to learn that I pay them to do well at school too. Whatever works!
Ally, mum of four, 6, 9, 11 and 14 years

It’s a scary, scary day when your baby comes home and asks to go on the Pill. I can’t prepare you for how that feels, but it is definitely worth preparing yourself for exactly what your reaction will be in advance.
Jodi, mum of three girls

Boy mums should care just as much about where their teen is as girl mums do. Instill a strong sense of responsibility in your sons.
Ada, mum of four, 12, 14, 15 and 19

You can’t ‘ban’ your kid from exploring their sexuality. You need to accept that they will have sex when they are ready – not when mum is ready.
Esther, mum of two girls

If they become completely wild, remember you are not alone. Drink, drugs, sex… it is not new and there is help and hope and plenty of other parents also wrestling with major issues. Find them, ‘cos you need the support.
Seana, Sydney Kids, mum of four, including two older teen boys

Get therapy for yourself if they refuse to go.
Seana, Sydney Kids, mum of four, including two older teen boys

So far I’ve found the hardest thing about parenting teens is dealing with excessive anger. Maybe it’s hormonal surges, maybe it’s independence begging for a fight, but fight they do. I’ve had to learn to control my own short fuse so things stay calm. That’s been tough!
Bron, mum of three, 9, 12 and 13 years

Do you have a good tip to add to our collection?

Our #1 rule for our kids' mobile use | Mumlyfe

16 brilliant books that spark creativity in kids (and you will love them too!)