Gwyneth regrets not having a third child. “All I’m saying is it’s not nothing,” she told the New York Times about not trying for a third child with Chris Martin. “I really wanted another one.”

We’ve all been there, Gwyneth, and chances are you might be there right now. “Should I have a third child?” is probably the #1  question asked by mums of two. While some mums have two kids and feel done and that’s that, many more are left wondering. A third child seems daring and unconventional. Three seems a little reckless and exciting. More than anything, a third child seems doable.

A third child means you get a bonus middle child

There’s been a lot of talk lately about the extinction of the middle child, as hypothesised recently in the New Yorker magazine. As a middle child myself, it seems imperative that we all start having at least a third child immediately, less our society loses the superpowers apparent in the neglected middle child.

Over a decade ago now, we went there. We had that lucky third child, and it’s safe to say that I absolutely love having three kids. I’m a massive advocate for ditching the neat twosome and heading into uncharted ‘larger family’ waters by having a third child. I don’t know what it’s like to have four or five or even ten kids (go say hi to Erin if you want to know what it’s like to have ten), but I do know that three is amazing.

Erin might need this: How to balance work and family (aka a full life without guilt)

This is how it breaks down

That said there are negatives and positives to everything and having a third is no different. Let’s start with the negatives… that way we can end on a positive note!

Quick note: I totally get that not everyone can have the number of children they want to have and I am saddened that this topic can be heartbreaking for some women. With respect, this is not an article about that.

Why you wouldn’t want to have a third child 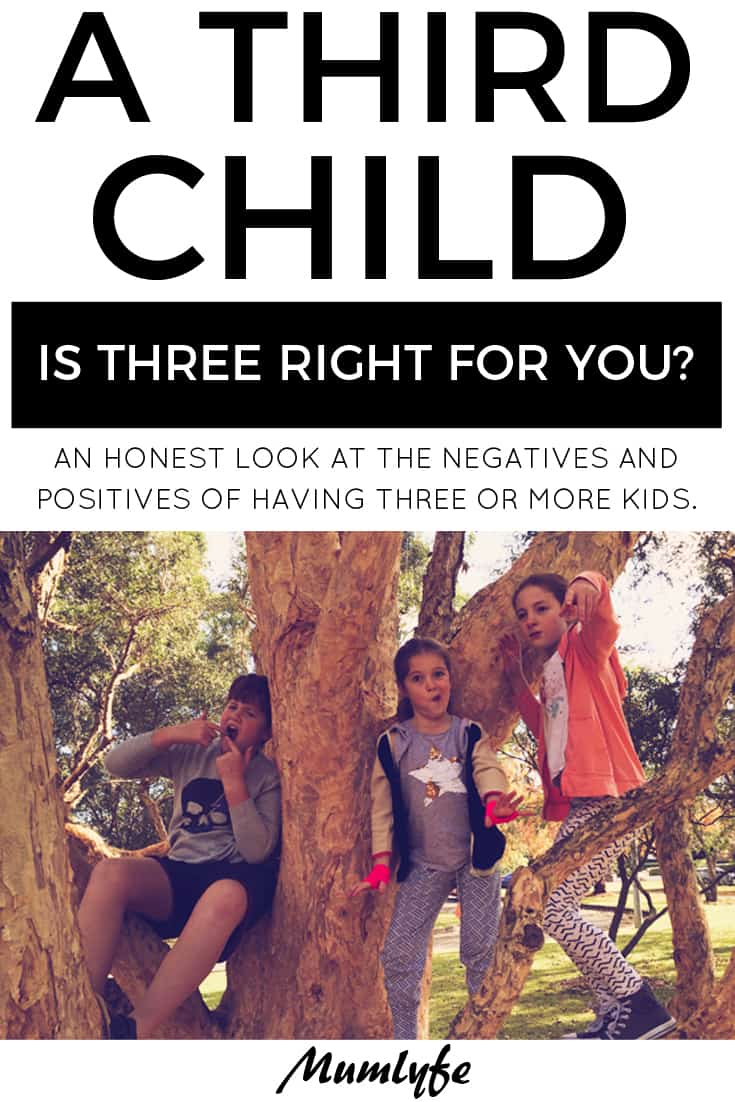 1. It’s even more expensive than you think

Quite apart from the fact that when you add another child you add another expense column, a third shouldn’t technically cost you 33.33% more, but they do. The breaks you get from going from one to two can’t be relied on for #3. Hand-me-downs don’t generally make it through two kids. By the time things like baby stuff, toys, clothes, school uniforms and shoes get to kid number three, they’ve got no business being around people. So you have to buy all new things for #3.

Now factor in holidays. Your family won’t fit into a standard hotel room, so you will need to book two rooms or a large apartment wherever you go. Even a weekend trip away gets  very expensive when you’re travelling like that and you can absolutely assume that five star luxury accommodation is a thing of the past.

All that and we haven’t even discussed the extra child to feed, educate, clothe, entertain and reward.

So, if you like money, a third child is not for you.

We’ve already determined that you won’t fit your car or into a hotel room, but extrapolate that out to life itself. Your family of five will not be considered a ‘family’ on family tickets anywhere. You will always have to buy a family ticket and then an extra child ticket. Even the zoo thinks a family is four people maximum.

The zoo is not the only one. Everything comes in packs of four – four hamburgers, four fruit snacks, four everything. You will always have to buy two packs of everything and then another pack to use up the last pack and so on for the rest of your life.

You also won’t be able to ride bikes as a family until the kids can ride their own bikes. Basically, there will always be someone in the family feeling left out, no matter what you do.

So, if you like simple, a third child is not for you.

3. You will always be part of a crowd

Three is definitely a crowd and you will need to take your little crowd with you wherever you go. You’ll also need to cater for the crowd, organise the crowd and get the crowd out the door in the mornings dressed and on time. Remember too that with a crowd comes extra noise. Two shout at each other (as children do when conversing) and the third child shouts even louder to be heard over the other two. It’s a little bit like being at a football match every single day of your life.

If you like calm, three is not for you.

4. You have 4 x more relationships to manage

You can see from the above that in 3 out of 4 scenarios, someone isn’t happy. You will need to get used to this.

If you like harmony, three is not for you.

5. Three is harder to hide than two

Most people will take a couple of kids off your hands for an hour or two and are happy to do so. It’s not even uncommon for them to offer to take your two overnight – “go out and have a great time, don’t worry about the kids!”

When you have three kids, that never happens.

Rather, when you have three kids and you need some time away, you have to wrangle them into an assortment of accommodations. Sometimes you can split it boy/girl with the girls going one way and the boys the other, but most of the time you have to arrange three lots of people to take one child each, lest you scar the ‘extra’ child for life. This makes the effort of going anywhere without them greater than the ordeal of taking them along.

If you like solitude, three is not for you.

Okay, I’m glad I’ve got all the negatives out of the way, because what I really want to tell you is that you need to ignore all of that and have three kids anyway.

Why you simply must have three kids

Ignore everything I just said, because none of it matters at all when you are deciding whether to have a third child or not. You only need to know one thing:

No matter how expensive we think having children is, it’s totally, utterly, completely worth it. When we were trying to talk ourselves out of having a third child it always came back to that. There was nothing we wanted to give our two kids that was worth more than giving them a sibling. There is nothing in the world that’s worth more than a child and nothing you wouldn’t sacrifice to have one.

And you know what? It won’t bother you one bit. 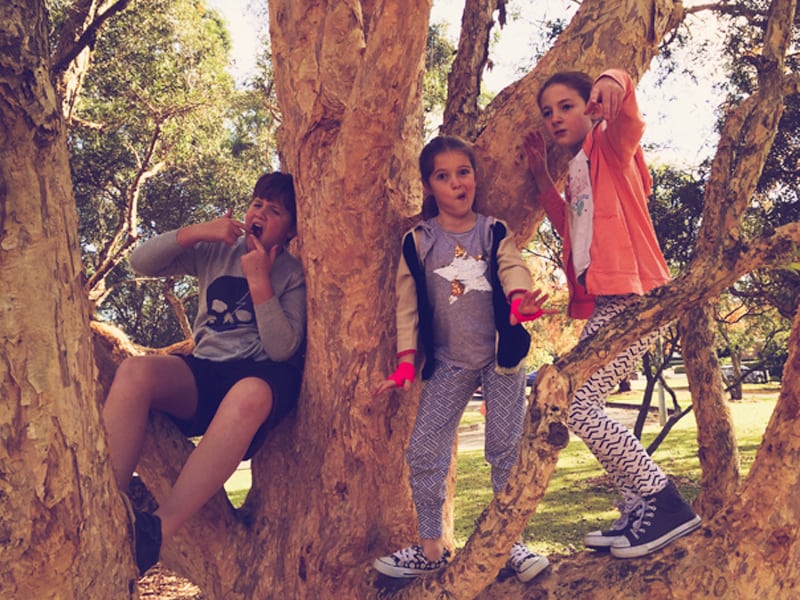 How many kids are in your family? Are you done?

Love this post! We found it a hard decision - went for number 3 and ended up with twins! My husband spent many months saying ‘I think I was happy with 2’!! Two years down the track I think we have adjusted to our ‘big family’. For sure so many things seem like they would be simpler if there was just 2 kids. But really I think we have just traded some pluses for different ones.

I will forever be sad there was no third child. BUT I was always the third friend, ie left out, and never wanted my children to have that. So I actually wanted four and my husband just would not go for that. Also I do think about population growth and it's impact. I feel super awful for saying that but I do. If a third "happened" unplanned I would not say no though!!

There are so many reasons why we have the kids we have, all of them valid and valuable.

Lol .. as mother if 3 children I definitely relate to negative #5 ... NOBODY wants to take all three ... not even grandma!!! But I always knew 3 was my sense of "family" and would not want it any other way

LOL, it's SO HARD to offload them, isn't it? The good news is, once they get older, it's much more reassuring to leave three together than two, I think.